Lori Anderson and Heather Millican teamed up to host the Art of Awareness blog hop. The concept was for everyone to purchase a word bean, a polymer clay bead, in the colour of their choice and with a word of their choosing on it.

I have many things that are important to me and that I want to remember, so I bought 3 beans. Remember these? 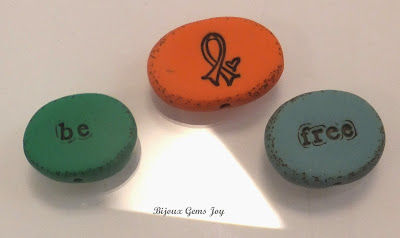 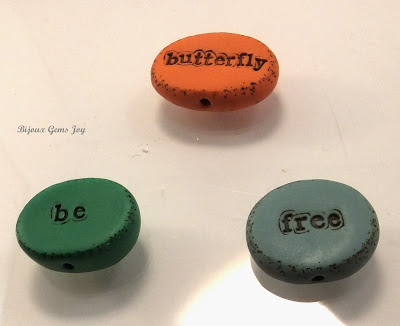 My first plan had been to make a necklace with the 3 beans strung in a Y layout. When the beans arrived I was surprised at how large they were. I’m not sure what I was expecting but it was definitely tinier. Not a problem, resilience is the order of the day.

I decided to make 2 separate key chains instead.  Here’s the first one and its story: 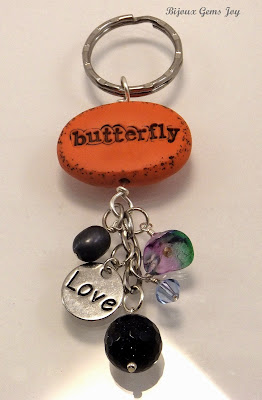 The orange colour was chosen to bring awareness to Attention Deficit Disorder. The word butterfly is part of our personal family history.

When our son was a little boy we noticed very early on that he was easily distracted, losing his concentration, almost running from activity to interest and back. Through his first few years of school his teachers kept commenting, almost complaining, that he did not pay attention, was not learning, and even could not understand. He was enrolled in a French Immersion school, an enrichment program in Ontario. This meant he was not entitled to additional enrichment support, like counselors or evaluations. The teachers and the school wanted us to move him to a regular school and non-enrichment program. Even then it would still be a year before he would be eligible for further evaluation.

Well we knew our son. We knew he was very intelligent! It was something he showed every day. In the parent teacher session where we were first told he did not have the capacity to continue in French Immersion, my husband and I did not allow the teachers, yes there were 2 of them there, to push us into moving him. We asked question after question, about his behaviour, about what was being taught, about what happened on quizzes and tests, about whether they had ever tried to ask him “surprise” questions when they thought he wasn’t paying attention, about his responses to those surprise questions. With every answer it became so very clear to the teachers, he was learning, he did understand, he did participate in his own way. They admitted that “yes”, they knew he was capable but they just couldn’t help him.

At that point my husband and I stated that we would pay for the evaluation and counselling required. The teachers and the school were totally shocked that we would do this. Apparently no parent had pushed their commitment to keeping their child in French Immersion the way we did.

To make a long story short(er) our son was evaluated and was diagnosed with ADD, Attention Deficit Disorder. Many years of counselling followed, many strategies tried, many tools used. We did not rush to medicate him. Finally, after 2 years we sat down with his then current teacher, a woman with incredible patience and love for her job and her students.

She told a story about our son’s school day. The analogy that struck a chord was about an event that had happened a couple of days previous. They were studying dinosaurs, like any typical little boy a favourite subject of his. He was fully engaged, participating and asking and answering questions. Then out of the blue a butterfly floated past the window near him, and that was it. His attention was out the window with the butterfly, and he was oblivious to the rest of the learning session.

We recognized we could not help him without going to the next step and finding the most appropriate medication. It was a long road, the counselling continued throughout, the type and strength of medication changed many times to meet the needs of that time. Now here we are, 20 years later, and he is a fully trained computer science major, working at a job he loves. All the medication stopped 2 years ago when he and his doctor (our family doctor who was on the journey the whole way with us) agreed that it was not making any difference for him anymore. In June we go to Waterloo to celebrate at his commencement ceremony where he will receive his bachelor of mathematics, computer science.

It was worth every step.

And now the story of the other 2 beans. 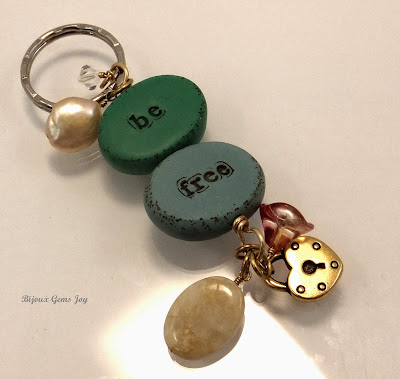 This is my daughter’s story and it’s not over yet. The green colour is for Mental Health, and the teal for Anxiety Disorders.

Our daughter also has ADD, diagnosed when she was a teenager. All through school she did not have a great social life, bullied, ostracized, ignored. She would cry many days after getting home, until eventually she found some friends. She also learned to put on a tough outer shell, ignoring the cruelty, refusing to stoop to their level but refusing to let them continue.

Even so, it was always apparent to my husband and me that she was not as happy or confident as she should be. She’s a December baby and did also exhibit the younger maturity sometimes seen. We convinced her to stay an extra year in high school, do the grade 13 that the Ontario government took away a few years previously. The thought was it would give her a chance to grow a little more, gain more confidence, and be ready to go away to school.

Our daughter has always idolized her brother and wanted to follow the same career path. The year she applied there was an overload of submissions and she did not get her first choice, instead was offered an alternate program with the potential to transfer. So off she went, away to school. If we had known then…we would have tried to convince her to…do what? I don’t even know.

All I know is her calls became less and less frequent, she was often studying when we called, was down and unhappy when she came home for a visit. At Christmas we almost didn’t let her go back. By mid January I was over there almost every weekend, taking her out, getting supplies, bringing her home for a few days.

By the end of January she wasn’t going to classes anymore, would hardly leave her room or talk to anyone. (Her beloved brother was away on an 8 month work term. She felt there was no one there for her.)

We finally convinced her to see a school psychologist. Preliminary diagnosis? Mental anxiety disorder, potential clinical depression. Within the next 2 weeks, with the help of the counsellor, we supported her through the steps to officially withdraw from school and brought her home. It’s been 16 months of counselling, suicide prevention steps, medication, and doctor’s visits. For the longest time there were no sharp instruments to be found anywhere in our house.

This story has taken long enough so I won’t go into all the details of those 16 months. I will tell you though that as a mother there is very little worse than knowing your child doesn’t want to live anymore and not having the ability to just make everything better. I was lucky! My child is still here. She is doing better and is preparing to go to college in September, in a different course that fits with her love or art and animation. Is she better? No, not yet. I am confident though that she will be.

Oh, and the words? Be Free. Be free of the anxiety, be free of the fears, be free to explore her dreams and grow her own butterfly wings. 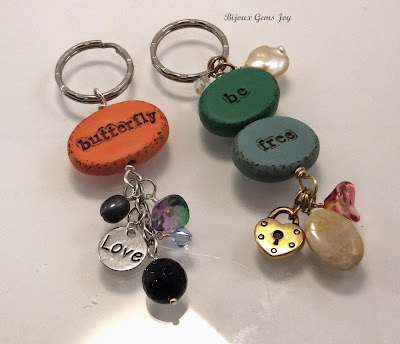 Thank you for having the patience to stay with me. I wasn’t sure if I would be able to write both stories. Doing so has been cathartic and I am grateful to Lori and Heather for making this possible. I am keeping both of these key chains to continue to remind myself to be aware. I hope you find your reason for awareness, your cause, and it works out for you.